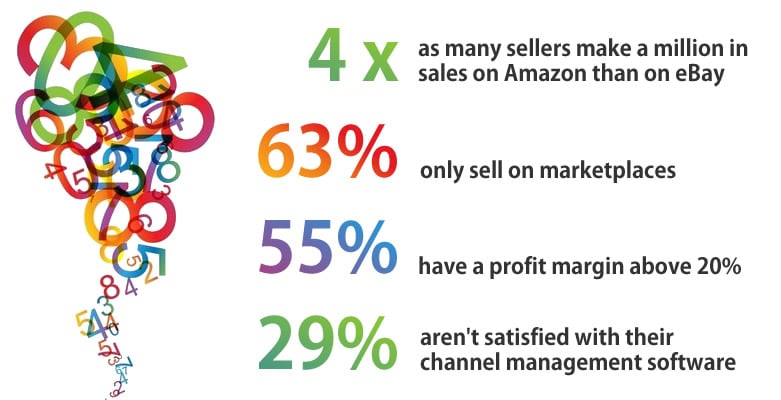 Earlier this year Feedvisor and Web Retailer asked over 200 sellers – Feedvisor customers and Web Retailer members – questions about where they sell, how much profit they make, their expansion plans, the software they use and more.

Here are the top ten headline statistics from that survey, together with deeper insights into the data.

We asked sellers for their annual revenue on Amazon, eBay, Sears, Rakuten, Newegg, Etsy and other marketplaces that they sell on.

A small percentage of sellers surveyed (2.1%) make over $10 million per year in revenue from Amazon’s marketplace. None of the other marketplaces look particularly strong, but Newegg is the narrow winner over Rakuten in the highest revenue bracket ($100,000+) for those who sell there.

What is your annual revenue for each marketplace?

63% only sell on marketplaces

There are many advantages to selling through online marketplaces, but there are also risks. The most serious risk is being banned completely from selling. Bans are not all that rare, and will instantly finish a business if it’s their only sales channel.

Still, the majority of sellers surveyed only sell on marketplaces. Despite the risks of marketplace selling, the alternative – having your own web store – is easy to get started but very difficult to make successful.

Do you sell on any other platforms besides online marketplaces? There’s a perception that the fierce competition and low overheads of marketplace selling drive profit margins into the ground – the race to the bottom.

Around one-fifth of sellers operate on margins under 10%. It’s difficult to imagine how these sellers would cope with unforeseen circumstances like fee increases or under-performing stock. But more than half have much higher margins above 20%, and 6% of them are lucky enough to have margins over 50%.

What is your average profit margin? Inventory and marketplace management software plays an important role – some would say an essential role – for marketplace sellers. Its job is to maintain a “single source of truth” database for a seller’s stock, and synchronize that data with multiple marketplaces. The synchronization has to work in both directions, both submitting listings and tracking sales.

It’s a tough job to maintain smooth integrations with multiple systems, and provide an easy-to-use control panel for editing and reporting on complex data. There are many places where software providers can fall short, and the survey reflects that.

How satisfied are you with your channel management tool? An amazing breadth of products can be sold on eBay, and on Amazon to a lesser extent. In the breakdown of categories sold, three categories for home and family life came out on top in our survey – home and kitchen, toys and games, and baby products.

Categories more associated with leisure follow – beauty and health, electronics and books. Perhaps this is an indication that families turn to marketplaces to save money on the essentials, and sellers are simply fulfilling that demand?

Which categories do you sell in?

In particular, 36.8% of sellers carry between 1,000 and 10,000 SKUs, but only 12.6% make the majority of their revenue on that range of SKUs. Perhaps the additional products are carried to offer comparison and “round out” their ranges – a technique normally associated with bricks-and-mortar retail. Or it may be that sellers are weighing themselves down with product lines that simply don’t sell, or add any other value to their business.

How many SKUs do you have, and how many represent the majority of your revenue? 72% don’t use a marketplace management tool

Marketplace management software isn’t a new thing. In fact, I’ve been covering it on Web Retailer for eleven years. But a lot has changed in that time: many sellers have come into the business and been successful, more have come and gone. Marketplaces have come and gone too, and so have the tools for managing them.

If there’s one constant, it’s the ever-higher standards and complexity of selling online. Perhaps that’s why, after all these years, there’s still no clear leader in marketplace management software – and the market is more fragmented and diverse than ever.

Do you use a channel management tool? Profit margins on eBay and Amazon are almost identical

Both eBay and Amazon are known for their low prices, but eBay is generally seen to be the cheapest of the two. It certainly has the highest number of sellers, and tends to be the first marketplace of choice for new sellers. New sellers are the most likely to compete aggressively on price which they do to build their reputation, or because they have lower overheads or (quite often) because they don’t understand all the costs of selling.

So I was surprised to see how little difference there was in the profit margins that sellers reported for each marketplace. It may be that the slightly lower prices on eBay are balanced out by slightly lower fees.

What is your average profit margin for each marketplace?

Most are looking for new ecommerce automation tools

Since 72% of the sellers surveyed don’t use marketplace management software, and 29% of those who do are not satisfied with their software, it’s no surprise that more than 50% of sellers are looking for new software across several different categories.

Will you be looking for new tools in any of the following categories over the next year? 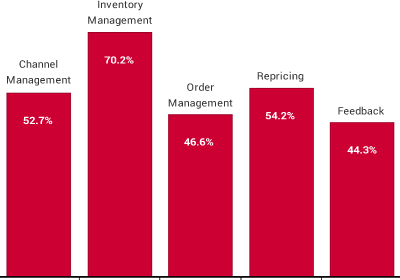 38% plan to expand beyond eBay and Amazon

Finally, sellers are looking to diversify by selling on new marketplaces. Those already selling on Rakuten report lower profit margins than other marketplaces, but it tops the table for expansion plans with 35.8% of sellers intending to sell on it.

The “other” grouping comes in second with 30.9%, perhaps reflecting the growing strength of specialist marketplaces.

Around 20% of sellers are looking to expand onto eBay, Newegg, Etsy and Sears, while Amazon is way down at only 6.2%. It appears that almost all the sellers who want to be are already on Amazon. It’s surprising to see Etsy so high up the table, given that it is still a niche marketplace which limits the products that can be sold there – so not all sellers will qualify.

Which other marketplaces are you looking to expand into? In this post I’ve picked out ten of the most interesting statistics from the 2014 online marketplace seller survey conducted by Feedvisor and Web Retailer.

I think it’s a fascinating snapshot of marketplace selling and hope you’ve enjoyed the findings. We’ve found that much of the data is quite closely in line with other sources, but like all surveys it reflects what the survey respondents told us and it may not match what you find in your own business or marketplace selling as a whole.

What do you think to these statistics? Are they all what you would expect or are there some surprises in there? I’d love to hear what you think in the comments below!

This is a brilliant research summary on marketplaces and seller habits etc. great stuff.

Sorry, only for participants.

Great summary, Andy! We’re seeing more demand than ever for multichannel ecommerce software that’s actually easy to use and does not require an MS in Computer Science.

Wicked stats again! you guys are rocking this information.

I wonder what the stats are like now for 2016 across the profits for all these players. There are more and more people on Amazon using either Amasuite or some other product research tool to access markets. But Amazon is growing so fast still too. Don’t look like they are slowing down.

I think they might be the next Fedex haha.

Great Site and Great Blog….i almost buy my product from Amazon and Ebay and customer service have been good. I am also interested in knowing how anyone can start such a marketplace. Anybody with a solution will bea great help.

Krishna, if you are seeking to start such a solution, rocketbazaar.com would be answer for you, It is a ready-made marketplace solution to kickstart any such marketplace.

I dont believe any of this.I have been on Rakuten for six months, not a single click or sale. I had my estore open for 6 months and i just made my first sale on friday. These numbers are all wrong

Thanks for the comment christoph. Bear in mind that this post is four years old, which is a long time in this industry, and also that different people’s results will vary a huge amount.

In my opinion, a sample of 200 vendors is too small to set trends.