The top 1,000 eBay sellers worldwide, updated for 2021, including country lists for the US, UK, China, Germany and Australia. 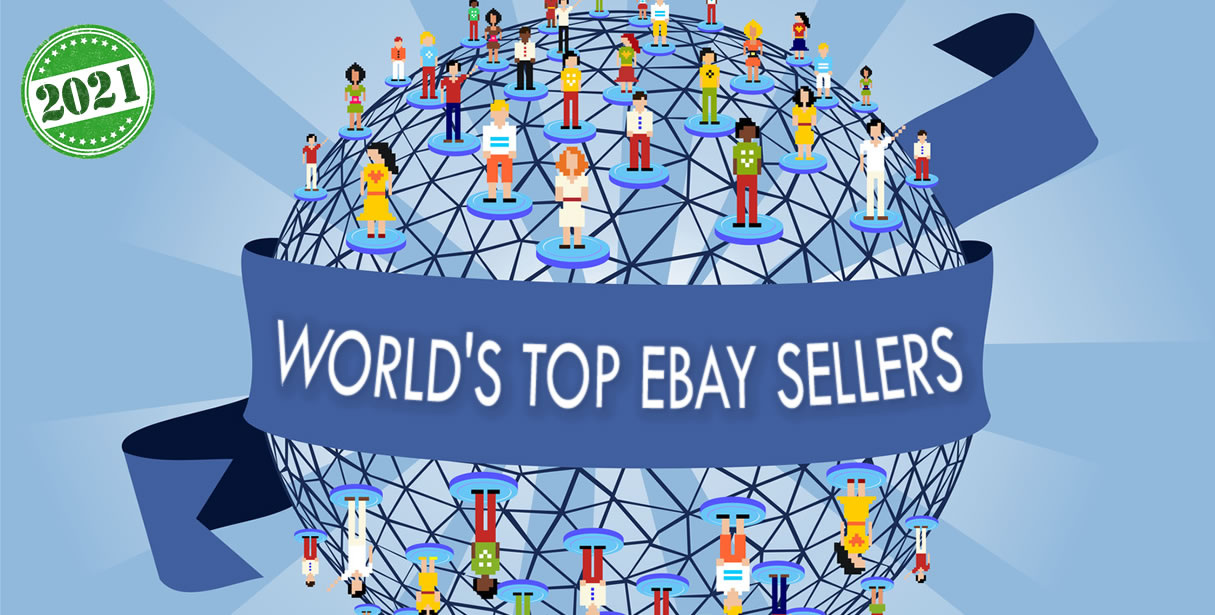 UPDATED: This post was updated in March 2021. Many thanks to ecommerce intelligence firm Marketplace Pulse for providing the data.

Here’s the latest edition of the world’s top 1,000 eBay sellers, updated from our last edition published in February 2020. As well as the overall list, there’s a breakdown for five different countries, and an analysis of cross-border selling.

We also publish a list of the world’s top Amazon sellers.

These are the sellers who have gained the most feedback in the last 12 months. Feedback volume is a useful approximation of the number of units sold, but is not directly linked to sales revenue.

The top three sellers on the list have been the same for five years running – musicmagpie, medimops and worldofbooks08. The whole top ten shows little movement, with only one seller entering since last time: comc_consignment of the US has climbed from #16 to #7, replacing get_importcds (also from the US) who has only just fallen out of the top ten to #14.

So here it is: the full list. Use the “View More” link at the bottom to load one hundred more sellers each time you click.

1 – Sellers without an indicator were not in the 2020 list. Hover over the indicator to see the 2020 position.
2 – Total feedback received. This is shown instead of the better known Feedback Score, as that can be an inaccurate indicator of sales volume.
3 – Positive feedback received in the last 12 months. This differs from eBay’s own feedback percentage calculation which excludes repeat feedback from the same member for purchases within the same calendar week.

How many top eBay sellers are cross-border traders?

Of the 88 international eBay traders, 65% are based in China or Hong Kong – 57 sellers in total. This is a very sharp fall of 76% in the number of Chinese sellers, accounting for almost all of the overall drop in cross-border trade.

Which countries do Chinese businesses sell to?

Despite the steep drop in Chinese businesses, cross-border selling on eBay is still dominated by China and Hong Kong. 65% of the 88 eBay sellers in the top 1,000 who specialize in cross-border trade are Chinese businesses selling to the US and Europe. International sellers from other parts of the world fell as well – by 24% from 41 to 31 sellers.

Why has the number of Chinese sellers in the top 1,000 dropped so dramatically?

One factor is an apparent eBay crackdown on “location abuse”. This is when businesses falsely declare the location of items on their eBay listings, to gain an advantage in the search rankings. For example, a business in China might say their goods are in the UK, but actually ship them from China. This practice angered many eBay buyers, particularly when they filtered the results specifically to find sellers in their own country. A crackdown was never officially announced, but appeared to begin with new shipping rules introduced in 2019.

Another factor is the introduction of new VAT rules in the UK and the EU, at the start of 2021. Online marketplaces are now required to collect VAT on behalf of sellers, making many items which had previously avoided the tax more expensive – by 20% in the UK.

Cross-border trade is not completely dominated by China. The top 100 features Belgian philatelist matthijs_philatelie at #38, who sells mostly to the US. Another Belgian stamp dealer, antverpiastamps, features at #91.

The huge German seller of used books and DVDs, medimops, trades on eBay UK as momox_uk, at #71 in the list, and they are immediately followed by rarewaves-outlet, a British music dealer selling on eBay Germany, at #72 in the list.

The final cross-border seller in the top 100 is medimops once again, with their French eBay account, momox, at #96.

It’s important to note that these are not the only international sellers, just those who primarily sell outside their home country. Huge numbers of eBay sellers trade across borders, while continuing to make the majority of their sales in their home country.

Which countries have the most top eBay sellers?

These are the countries with the most sellers in the top 1,000.

The UK has gained 91 sellers in the top 1,000, for a total of 399. It remains in the top slot and there is now even more space between the UK and the other countries in the table. The US has added 49 sellers to have 252 in total, moving it up one spot to second in the list.

Germany has also moved up one place into the third position, adding 39 sellers to make a total of 217. China is the biggest loser, with 179 fewer sellers in the top 1,000, causing it to fall from second to fourth place. It now has only 43 sellers on the list.

The top ten countries are rounded out by Italy, Canada, Switzerland and Spain, each with fewer than ten sellers on the list. Japan, Malaysia and Singapore propped up the list in 2020 but they have all now fallen away. Japan only has one seller in the top 1,000 this year while Malaysia and Singapore have none.

The Top eBay Sellers in the US

The Top eBay Sellers in the UK

The Top eBay Sellers in China

The Top eBay Sellers in Germany

The Top eBay Sellers in Australia

The list is ordered by positive feedback in the last twelve months. Feedback is an indicator of sales volume, but not revenue. Not all buyers leave feedback, so the number of units sold will be higher than the volume of feedback received.

If you have any questions just let us know in the comments below!

Succeed on eBay and maximize profits with the best software for SEO, analytics, feedback, listing design and optimization.

You didn’t say but I assume this list was by revenue. One thing that I noticed is that there is a lot of media sellers in this list: books, video games, music, and DVDs. One wonders how sustainable this business is or whether they are just serving as liquidators for other companies.

I see you make note of sellers having a premium store outside of their home country. I have never considered this myself. What advantage would it be? I sell in UK, OZ, and other english speaking countries by just extending my listings.

Hi Jack, actually the list is by feedback in the last six months – so an approximation of sales volume rather than revenue. I’ll see if I can make that clearer. It would be interesting to dig further into the business models in use. I was a little surprised by the variety, and yes media does figure prominently. Maybe it’s an indication of the low margins in media, and therefore the need for very high volumes? I don’t think there’s a benefit of using a non-home eBay site to make your store premium/featured (it will appear in that country’s premium… Read more »

For media you would definitely need volume. I was grocery shopping at my local wal-mart today and was amazed at the amount of media product in bins at insanely low prices. Perhaps I am just ahead of the curve but I haven’t paid for real media (non-downloadable) in a couple of years so selling it seems a bit dated.

Wonder what the ASP is for these sellers and what return rate or non payment rate might be for them.
Non payment rate and return rate is significant in many categories and may not be taken into account in this if its mostly feedback related.

Anchor shops are included, do you mean as a separate list?

Andy yes as a separate list as that would help us lesser mortals to gauge whether or not anchor shops are worth the extra bucks, since we signed up for an anchor shop we haven’t noticed any increase of sales and considering we have gone from 1000 items to nearly 2500 listings now.
Cheers Dave

I made my decision for an Anchor shop (yes, I got one) because I evaluated the number of free listings versus what i would pay for listing fees. My total fees are much less. This is in the US, your mileage may vary elsewhere. Easy enough to do the math based on your local marketplace’s rule.

Hi Andy, thanks for your list.
Do you know why most of the chinese cross boarder seller have no more active listings??

Hi @Worner, I’m not sure what you mean. I’ve just clicked the links for all the Chinese sellers down to #70 and they all have active listings. Am I missing something?

Hi Andy, interesting post! I was just wondering, what do you mean by they are based in ine country but “have a featured store” (or anchor) in another? Do you mean their store comes up on the list for featured stores in that other country, eg in the US for a seller based in china, say?
And, they are still shipping from overseas to the customer, correct? Just wanted to make sure I wasn’t muddling it or missing something. Thanks again 🙂

Thanks Julia! Yes, that’s exactly it. They have upgraded their store to premium/featured/anchor using the eBay site in another country. I didn’t find any stores that were on the featured list on more than one eBay site, by the way, so I think that’s probably not possible to do. In most cases they will be shipping direct from overseas, yes. They could choose to hold stock locally to their buyers, but most will ship direct.

I was amazed to find such a comprehensive list, but I was totally stoked to find us on this list. I’m so proud of our team for making this achievement in under 16 months and I must give a big thankyou to you Andy for giving us a benchmark to work towards.

Hi there, I noticed your comment and I’m writing a paper on what makes a sensational ebay seller – would you please be able to give me some hints and tips on why and how you have become so successful? I’m based in Australia, so, would really appreciate your feedback. thanks Jules.

I’ll look into that, thanks for flagging it up!

It did cross my mind too Andy, I’d be interested to know why it was missed. For me, its always the one that springs to mind for the bigger eBay sellers.

It looks like eBay’s featured stores directory is a little erratic, I’m looking into getting the list updated for babz and any others missed.